Red Jasper – Meaning and Benefits – Red Jasper is a massive, fine-grained opaque rock, a variety of Chalcedony, with a Mohs Hardness of 7 and a trigonal crystal structure. Its name is derived via Old French, Jaspre and further back to Hebrew, yushphah. The common red colour is due to iron inclusions in what is basically a chert. 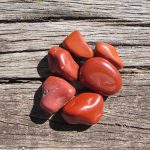 Jasper is known to have been a favoured stone in the ancient world; it was carved to produce seals circa 1800 BC, on Minoan Crete, as evidenced by archaeological recoveries at the palace of Knossos. It has been suggested that the odem, the first stone on the High Priest’s breastplate, was a Red Jasper.

Red Jasper is one of the oldest known gemstones and has been used for ornamentation, carvings, cameos and intaglios. It was typically engraved with images of lions and archers and used for vases, seals, and snuff boxes. It is one of the traditional birthstones for March.

A fine protective stone believed to send negativity back to its original source, also carried to guard against poison and to cure fevers.  Often called the “mother of all stones” due to its transformative and magical properties, it is also used as a health and healing charm. Red Jasper has been worn by young women to promote beauty and grace. 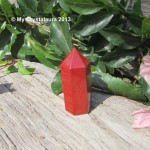 Ancient Egyptians wore Red Jasper scarab amulets to increase their sexual energy. Both sub-continental Indians in Asia as well as Native Americans see Red Jasper as a magical rain stone and also a powerful healing stone. Legend says that Jasper would drive away evil spirits and protect against snake and spider bites.

Red Jasper is called the “stone of fairness and justice” because it is claimed to decrease injustice and facilitate in unfair situations and for providing insight on how to rectify unjust situations.

Traditionally Red Jasper is believed to combat exhaustion. It is said to have a stabilizing effect and to help you use your energy in a balanced manner. This stone will balance all chakras, stabilize your energy fields, balance yin yang energies and protect you from negativity.

Red Jasper is believed to encourage a deep connection with life and the earth and is said to bring a buoyant joy to life. It inspires a positive, joyful attitude and gives the motivation and energy to take creative action.

Red Jasper enhances dream recall along with your ability to glean relevant information from them.

Known as a stone of controlled passion, it is used to help control your zeal.  It is also said to increase responsibility, choice, and compassion.

Red Jasper is renowned for helping to rescue and guard from danger and for protecting against hazards. It protects from EMF and other radiation as well. Said to be outstanding for promoting survival and overcoming survival issues. It has a very nurturing energy and can help with deep seated ancestral or inherited issues. Red Jasper provides the courage to speak out and uphold your personal independence. It also protects from fears in the night.

Red Jasper is stabilizing and assists in healing by maintaining positive movement with all types of disorders and disease. It can align and balance energy in the body, ease emotional stress, protect against sight defects, help with the sense of smell. Strengthens and detoxifies the circulatory system, blood, liver and the heart. It also promotes physical energy.