A Crystals and Kids Story—Billy The Kid

The thing I love about these kid’s stories is the way in which they so innocently reveal truths about ourselves. Billy The Kid—A Crystals and Kids Story conveys yet another dimension for us to study.

Billy has been a customer for some time now. It was about the third or fourth time I met him that I nicknamed him Billy the Kid. His namesake, Billy the Kid, aka William Bonney was a notorious 19th century American outlaw. Outlaw is what Billy lives up to most of the time.

I first came across Billie when I was visiting another stall holder at our regular Fernvale markets. You’ll find us there most Sundays until noon selling Crystals and Incense and such. This poor stall holder was copping a blast from young Billie. It was the first time any of us had seen him at the markets. This twelve year old can swear like a trooper and has a nasty temper to help him vent. Unfortunately his parents are no help, as they watch on, apparently unable or unwilling to do anything to stop him. When on the rare occasion they try to intercede, he defies or plain ignores any direction or suggestion they put to him.

As I’ve watched over time, all the other stall holders seem to get on the defensive as soon as they see him. Nearly all dread him coming to their stall, even though he always has plenty to spend. Over time we have come to notice that Billy has a deep seated distrust of people.

The story develops for Billy The Kid—A Crystals and Kids Story.

Back to that first day. About an hour later he turned up at our stall. I was about to lay down the law to him if he wanted to come near our stall. Luckily for me, before I did, I saw a look in his eyes that stopped me. Instead I asked him if he liked crystals.

“I love crystals” was his reply. I don’t really know what prompted my response. “Well the crystals say they love you too, but they will only let you stop here if you behave properly and don’t swear, or else you can move on.”

Over the next few seconds, several things happened. I saw the anger in his eyes. I got the impression he was about to let loose with a tirade of bad language. He took a deep breath and held it. Then just as quickly as all that took place he let his breath out, you could see his body relax as he stepped forward.

“My favourite is Quartz,” he said. Just then his father came closer and announced, “You don’t want any of this s**t, let’s go. Move it now. 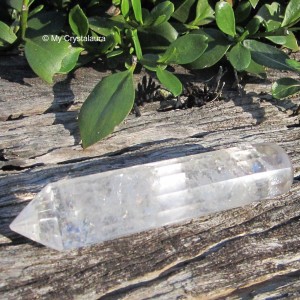 Billy turned instantly and let loose at his father. He used quite a bit of offensive language. When he was finished he turned back to the crystals. “Too late son, you’re going to have to move on.” I said. “I’m not your ******* son.” He yelled back and took off in a fury.

Next week he turned up again. Before he got too close I reminded him of what I said before about what was expected from him by the crystals. He grimaced and stepped forward and picked up a Clear Quartz  generator. As he did so he smiled.

Billy gets his nickname.

His parents arrived behind him. Again his father spoke to him with an angry tone. “Don’t waste your money on this b**l s**t. The young bloke turned and said very matter of factly, “I’ll meet you at the car.” He then picked up several crystals, held them for a bit and put them back. He didn’t buy anything.

It was the next week that he told me his name was Billy. I still found it hard to comprehend how he was so normal while spending time with the crystals and how he transformed into an outlaw when he moved away. Strangely I took a liking to him.

Over the coming weeks he was spending more time with the crystals and with us. He talked a lot about crystals and I was amazed at his knowledge. In between he was weaving parts of the story of his life. I’ll keep his story to myself, but he has had a rough time of it. When he said he loved crystals, he meant it. In so many ways I am certain that crystals contribute to the positive side of his Jekyll and Hyde switch.

Apparently his parents occupy themselves elsewhere in the markets while he has his visit with us. He is still hell on two feet elsewhere in the markets, but Billy the Kid has moderated a little. As he has gotten to know us, he confidently buys the crystals he wants to add to his collection. He apologises when he forgets himself and swears. While he is around the crystals he acts with a calm confidence and charm. This is very hard to believe when you see him in his Billy the Kid persona.

Billy’s example, if only people (parents) would watch and learn.

What Billy has reinforced for us is that people tend to respond to the way they are treated. Also that if you give a kid a bad name, you can be certain they will live up to it. To me Billy The Kid has become an affectionate nickname. Billy just really wants to know he is loved and to be given firm but kind direction and borders.

The crystals are his friends. I am sure he feels all of their positive vibes and responds accordingly. Kids tent to know intrinsically that the properties and energies of crystals can be their allies.  When he is around crystals and he is allowed to be himself, well as I’ve indicated he is a different person.

For some reason some parents find it hard to deal with their kids liking crystals and understanding what they are about. They will enforce their point of view or belittle their children rather than confront their own issues and biases.

Unfortunately the crystals positive effect is overridden by other outside circumstances and environment.

Billy has learnt to run rough shod over people and to act like a lout but it’s really just his defence mechanism. The only potentially positive side to his behaviour is that he gets his way; it’s just that he does it all wrong.

Hopefully, Billy The Kid—A Crystals and Kids Story has shown us that:
• Crystals actually help kids modify their behaviour for the better.
• Given half the chance, kids will live up to a better version of themselves.
• We owe everybody the opportunity to be their best self and to give them respect until they show they don’t deserve it.

As stated at the beginning ‘Billy The Kid’ innocently reveals many truths about ourselves.

Crystals, respect, environment and our actions give us all the opportunity to be our best selves.